Day 2 and again no rain. Fortunately the weather seems to be defying the forecasts! Quick cup of tea and it’s off the the sports centre for the first session of the day. 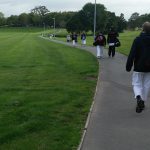 I’m back taking photos. Richard Naylor Jones is training, so the deal is I take photos of him first session and he takes some of me in the next one. It is nice sometimes to have proof  I was here! As Sensei Sherry comes in he asks me if I can take some videos using his camera. So off I trot, my camera on one side and Sensei’s on the other. Unfortunately after 10 minutes Sensei’s camera runs out of battery so I am back just taking pics.

Session over and it’s back to the room for breakfast and to don my gi for the second time this week. 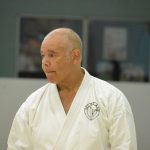 Next up is a Sensei Billy Higgins brain scrambler. We start off doing many different combinations that I know we will be using in partner work later on. It does help (a little) that I have done these before. But given my current lack of fitness I was a little concerned I wouldn’t be able to keep up. So partner up time. Great – I get someone young and fast! so off we go, A rough start and we get going – wow this is going well. We work through a few of the routines and then we get put into threes. We are joined again By Adam Willsmore. Now this routine I definitely know, I even use it sometimes in my classes. So I start in the middle and off we go. We all get a go and then it back to me. Sensei says do it 3 times, one slow, one medium and the last strong. I look at the young lad and we nod. So that’s three times strong 🙂

Then we get put into twos again, but this time there is an odd number, so I bow out as my knee is starting to hurt and the last thing I want to do now is overdo it.

Kata Time – Jitte.  A few times to the count fairly fast and then no count. Then we switch to Kihon Kata with kicks. My legs are feeling it now, and my knee is complaining about doing more work in one session than it has done in a long long while.

Feeling tired now, but Sensei Higgins has not finished with us yet! Back into threes and we all get allocated a number. Continuous freestyle with Billy calling numbers. When your number is called the other two attack you and it goes around and around. And we are finished, well at least I am.

After breakfast at the accommodation, it’s back to the sports centre to take photos.

This time the seniors have Sense Bob Rhodes for another of his full on Bunkai Classes. Kata was again Jitte. At the end of the class some of the young fast KUGB members demonstrated the Bunkai routine.

It’s now a half hour break and then  the Dan grade class starts. So it’s back to taking a few photos until 2pm when the Instructors assessment starts. Now that my son George has passed his 2nd Dan he can now do the assessment. 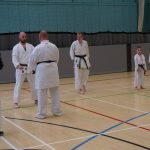 George and another candidate had to do a mini 15 minute class each with the volunteers. After the class there was a number of questions to asses knowledge of the KUGB. And its a pass all round!!

Now back to my room to post photos while George moves on to the BO class.

George calls me early to pick him up from the Bo Class. There is a mains water problem and half of Lancaster has no water and they are closing the sports centre. This is a worry for tomorrows training and tonight’s meal. 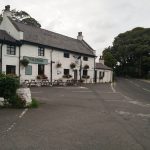 We pop out to the pub round the corner for a meal and sure enough it’s not serving food thanks to the water problem. Fortunately the Stork a bit further out does have water and is serving food. We have been here before a few times, nice food and beer and there are very nice walks around the area.

Then it’s time for a couple of red wines before retiring to bed.